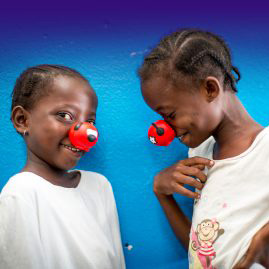 Comic Relief is a British Institution, and as Red Nose Day rolls around again today, the charity continues its incredible work to raise many millions for good causes globally. Skating Panda has its roots in Comic Relief too, with our Founder Andrea Hartley being an alumnus of the school of Richard Curtis.  Skating Panda originated as a one stop shop for charities who required comms, advocacy and fundraising support to keep making a positive change.

A few weeks ago, Comic Relief came under attack from David Lammy who criticised Stacey Dooley for posting a photo of herself hugging a child during her trip to Uganda. Of course, celebrities putting their faces to appeals is a tried and tested method of raising awareness and funds and has been incredibly effective for years.

And we also know that non-profits are facing unprecedented challenges and having to constantly innovate to find ways to raise the money. The third sector has been the focus of a lot of public mistrust and perhaps David Lammy’s comments were meant to add fuel to this fire. But to what end?

A few years ago, I travelled to Uganda myself and the local young people that I met were some of the most ambitious and high achieving I have ever encountered. At the age of 21, one of them already had two businesses and the other (who also had a successful fishing business which started with a single net and eventually grew to 24 boats) held a seat on the local council. I mostly felt inadequate and lazy when talking to them. I was there to make a film to talk about youth entrepreneurship, but also to get a closer look at the burgeoning economy in a post conflict country where so often the next generation are full of hunger and determination to rebuild their communities.  But that’s another blog….

For me this issue is less about the white saviour complex and more about the narrative that we, as an industry, choose to craft around developing countries. This is a hard line to follow when fundraising targets are looming.

It is no secret that there’s a near exact science to making fundraising videos or taking photos.  I learnt from a fundraiser early in my career that there is a specific angle at which to capture the child (it always needs to be a child if possible) to connect with the donor.

As communicators in the charity sector we have a very important balance to strike. We need to raise funds in the most effective way possible, but we cannot forget our responsibility to represent the people we are helping in as fair and empowering a way as possible.

It is in our interest to do so. The world is changing fast and younger generations no longer subscribe to stereotypes and broad brushstrokes. This means constantly challenging ourselves not to go into autopilot. We need to think about stories of empowerment and entrepreneurship as a means not only to raise capital but also to transition the narrative on developing countries to something that goes beyond a child gazing up to the camera looking forlorn.