Climate Change: Six Months to COP27 – what progress has been made since Glasgow?

Just over six months ago the UK’s attention was, for a couple of weeks at least, focused on climate change, Glasgow, and the international Conference of the Parties, or COP as it has become known. It felt like a big deal. It was the first global face to face conference post COVID and politically for post Brexit Britain an opportunity to show that we were still an important part of the international community.

But what did it achieve and what progress has been made since with six months to go to the next COP in Sharm El Sheikh? The uncomfortable truth is that nowhere near enough has been done and the threat to our way of life is real and present. From food security to loss of biodiversity, the challenges are clear but strong leadership is still needed in this space.

Currently, the world is heading towards more than doubling the 1.5 Celsius goal of the Paris Agreement by the end of the century. In 2014 the Intergovernmental Panel on Climate Change (IPCC) set out several scenarios based on various temperature rises. The Carbon Brief (2014) summarised them as follows: 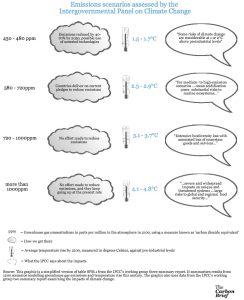 The focus for COP26 was to put the Paris Agreement (COP21) into action, to drive world leaders to ensure we remain within 1.5 degrees with a particular focus on mitigation, adaptation and financing for the loss and damage incurred from the impacts of climate change.

At the end of COP26 it came down to one thing: the end of the use of coal. The ambition for this was high and it wasn’t 100% successful, with some countries blocking an outright ban of future use. However, an agreement to phase it out was deemed progress and this was the first time in COP history it had managed to remain on the negotiation table.

Alok Sharma, the COP26 President, revisited Glasgow in May this year to highlight progress made since November. He stressed the urgency of countries fulfilling promises made at COP26:

‘Work to deliver on the commitments made here in Glasgow has quietly continued. Yet, we need every nation to pick up the pace”.

The Bonn Climate Change Conference, running until the 16th of June, has been positioned as the event that will set the tone for what comes in November. The focus continues to be on implementation and driving the agenda for mitigation and adaptation which is of particular importance for the geographical hosts. Announcing the end of her six-year term as UN Climate Change Executive Secretary, Patricia Espinosa has, this week, called on governments not to be deterred by current geopolitical tensions.

“Climate change is not an agenda we can afford to push back on our global schedule. We need decisions and actions now and it is incumbent on all nations to make progress in Bonn.”

Time is rapidly running out and the message continues to be that there is a stark need to increase momentum. All eyes will be on the world’s nations throughout the next six months to introduce practical policies, laws and programmes that put the Paris Agreement firmly at the centre of decision making in their home countries.

For more information on COP27 visit the website: Cop27 – Homepage

For more information on the results of COP26 visit: Ukcop26.org